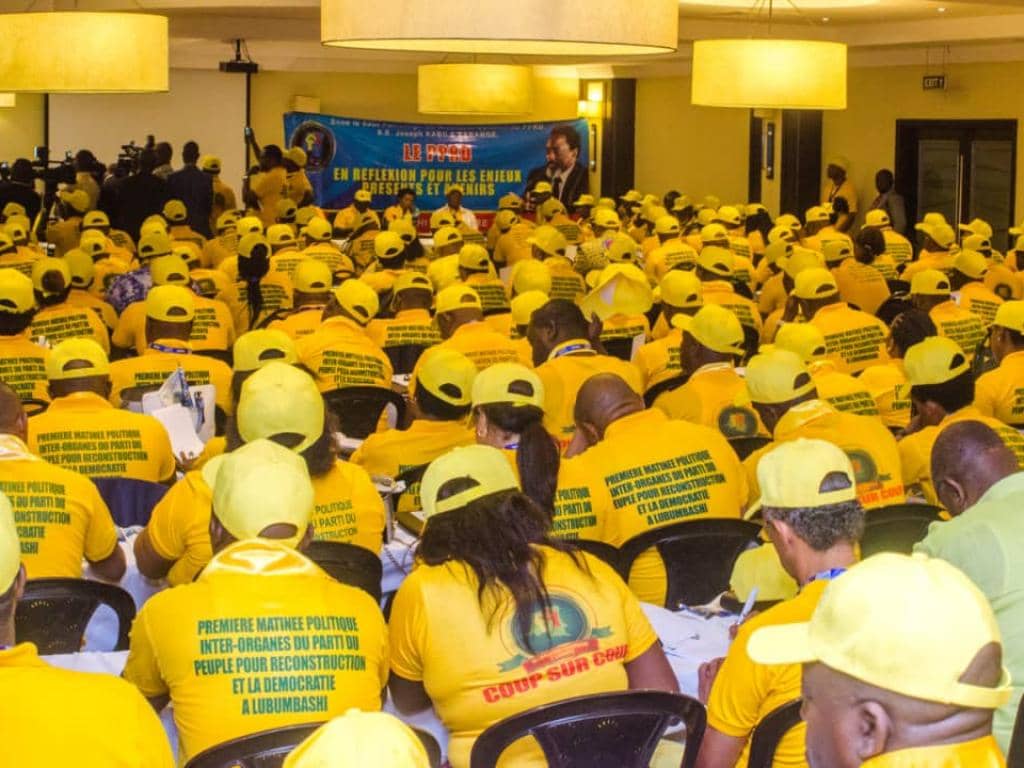 The People’s Party for Reconstruction and Democracy (PPRD) closed on Thursday December 26, 2019, its first budget conference at the Hotel Sultani, located in the commune of Gombe. The said conference, which took place over five days, from December 21 to 26, 2019, had the main mission to prepare the budget forecasts for the 2020 exercise of this political party of Joseph Kabila Kabange. Thus, to close these meetings definitively, the Permanent Secretary, Emmanuel Ramazani Shadary, honored the participants by giving each a patent, a symbol of encouragement. And it is with this in mind that he expressed his satisfaction for the work done as a whole.

In this same register, informs the Assize Rapporteur, the budget forecasts also include revenue from special contributions including donations made by full and adherent members, on the basis of subscriptions programmed by the political party and calls for funds within the framework Special Contribution Days (JOCOS). Lastly come the revenues of the production units which include the annual results arising from the party’s production, circulation, marketing activities, or participation income as well as the remuneration products for the services rendered by the party in different fields. At the same time, Déogratias Indulu pointed out that in the preparation of the activity budget for the year 2020, the budgetary committee was divided into four sub-committees to analyze the forecast of PPRD spending. It is a sub-committee in charge of equipment and investment expenses, a sub-committee in charge of party operating expenses, a sub-committee in charge of various salaries and wages and the sub- commission in charge of social interventions and political activities with visible impact. In addition, in its last point, the general report of the first PPRD budget conference accepts the recommendations of the Budget Committee. 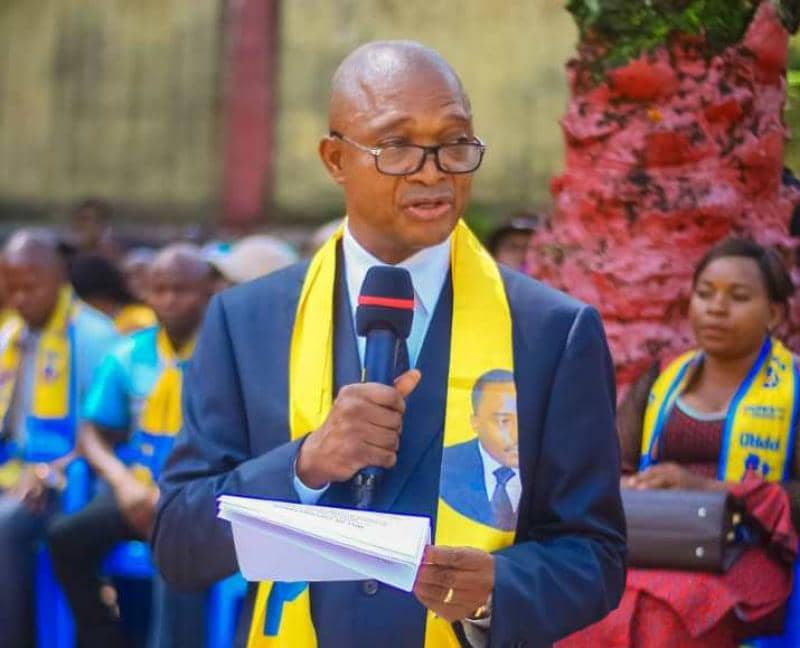 SPEECH BY THE PERMANENT SECRETARY COMMAN EMMANUEL RAMAZANI SHADARY ON THE CLOSURE OF THE WORK OF THE FIRST BUDGET CONFERENCE OF THE PPRD EXERCISE 2020, HELD IN KINSHASA FROM 21 TO 26 DECEMBER 2019

At the end of the work of the Party Budget Conference, organized for the 2020 exercise, allow me to pay a vibrant tribute to His Excellency Joseph KABILA KABANGE, National President of our dear Party and Moral Authority of the Common Front for the Congo “FCC” for the initiative and above all the essential recommendation to provide the PPRD with a budget for its functioning for the first time in the history of the Political Parties in the Democratic Republic of Congo.

As such, I express my full satisfaction for having accomplished this task in a relatively short time and especially for the technical quality of the work done.

To everyone, there is no need to remind with pride that the PPRD always maintains its level of avant-garde Party within the FCC and in the national political chessboard, because not only does it occupy enough political ground and deploys throughout the national territory, but also, it abounds within a large number of elected officials and executives with proven expertise and an undeniable technical, political and intellectual level and without comparison with other political parties in the DRC.

To this end, on behalf of the Initiator and National President of the Party, Comrade Joseph KABILA KABANGE, I send you all my congratulations and my thanks for having understood that the PPRD, as an organization, needs to modernize and modernize its Management Tools. For this, we had to imagine the mechanisms necessary to endow our Party, not only with the adequate budget, but also with revenue mobilization strategies, as Louis Baron so aptly affirms, “do me the right policy and I will will make good finances “.

The budget as a forecast tool relating to revenue and expenditure and management tool, will allow our political party to assume and plan in 2020, all the activities of its existence. Because the budget is the main limit to power which, in modern societies, tends to stretch too much. I quoted Michel Bouvier.

The conceptual phase of developing the Party’s budget has just ended. At this stage, we now know the lines of appropriations which have been allocated respectively, for the functioning of the central organs, namely the Political Bureau, the National Council, the Permanent Secretariat as well as the specialized structures in particular: the Youth League, the Women’s League, the Party School, the Bureau of Studies, Strategies and Archives, without forgetting the basic organs that are the Provinces and their basic Entities as well as the Diaspora. These lines are essentially the operating expenses, goods and materials, miscellaneous bonuses and staff costs, construction and acquisition of fixed assets, transport and intervention by the Party, political funds, interventions in specialized structures and our contributions to FCC and cover 65.8% of our budget estimates for Party expenses for the 2020 fiscal year. There are also expenses of internal provincial, urban, territorial and local political bodies whose expenses are close to 34.2% for fiscal year 2020.

For its implementation, I would remind and insist that the funds that will be mobilized and allocated to the various organs and structures of the Party are managed and used rationally and really allocated to the activities concerned. Going through the summary table of the budget forecasts of the Party’s revenues for the 2020 financial year, I note that the Party contributions at the institutional level give us a revenue of almost 21.28% of the 2020 budget, ie 6.2% at National Assembly, 1.74% to the contributions of the senators, 9.5% to the members of the Government, 3.6% to the contributions of the members evolving in the companies, establishments and public services and 0.1% of the contributions coming from the central organs of the Left.

I also note that the exceptional receipts that you control yourself defining contribute to our budget at 41.2%. They consist essentially of special contributions, days of special contributions (JOCOS) instituted from Lubumbashi, donations and legacies, production units, while the state subsidies section is at OFC and therefore non-existent, which is an inquiry to the public authorities in relation to the law on the funding of political parties.

Finally, I note that there are also receipts from interns in the provincial organs of the Party which cover 24.1% of the budget forecasts as well as 7.9% which cover the endowment of the National Executive Secretariat.

This is why, I take this opportunity to solemnly remind all the comrades of the Party, each in its category, to appropriate these budgetary forecasts and to obligatorily pay its contributions, without which, we will know in no way case concretize the implementation of this budget that we have just adopted ourselves by balancing revenue and expenditure. Thus, I appeal to the sense of duty, responsibility and accountability of each other in order to allow our Party to rationalize its functioning.

It is with confidence that I will report to the National President of our Party for the accomplishment of a job well done and the spirit of camaraderie that characterized the work of the budget committee throughout these meetings and above all commitments made by both to mobilize funds.

I am convinced Of course, that the National President of the PPRD to whom the primacy of the results of this work is reserved, will not fail to authorize its operationalization directly or indirectly after the reading according to which he can request the Budgetary Commission and no to the conference which ends today.

To conclude, I would like to reiterate my congratulations to the entire team that has worked, and I hope that these budget forecasts will be carried out and the next session of the 2021 budget cannot be convened without the re-editing of the accounts for the 2020 budget.

Being during the period of Christmas and New Year, I can not refrain already, to present to the Comrade National President of the Party, Joseph KABILA KABANGE and to his biological family, as well as to all the executives, activists and Party activists, my best wishes for happiness, longevity, prosperity, health and success for the year 2020.

Thus, on behalf of the National President of the Party, Comrade Joseph KABILA KABANGE, I declare closed the work of the First Budget Conference of the PPRD, organized for the 2020 exercise.