The terrorists of (M23) are still occupying and controlling the town of Bunagana, they have been on the border with Uganda for two weeks now. The terrorists with their Ugandan handlers are running extortion rackets and forcefully collecting taxes from poor Congolese families. The terrorists are also using Ugandans and Rwandese to peddle their propaganda. The propagandists are using victimisation and tribal sentiments to promote terrorism on Congolese soil. Thus, the terrorists have no popular support among Congolese, to freely pursue their terrorism, barbarism and plundering projects. That’s the main reason why they’re using Uganda and Rwanda local media to promote their criminality, as if DRC is their fiefdom. 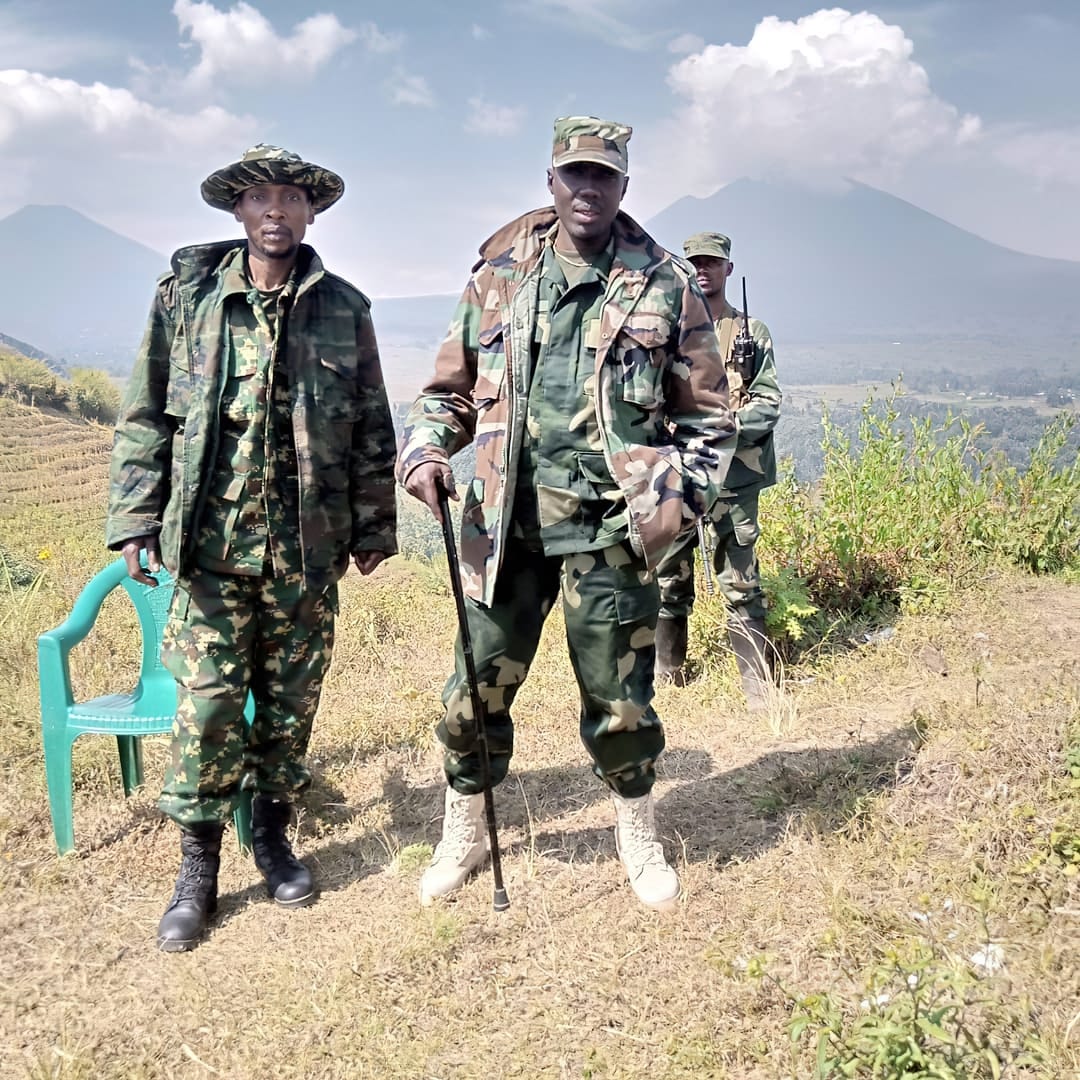 The murderous and thieving cabal of Rwanda and Uganda are very determined to turn Congolese into their slaves.

The military governor of North Kivu has prohibited business people from using Bunagana customs, at the DRC-Uganda border.
The Congolese national army had withdrawn from this important commercial centre to avoid civilian casualties in clashes with the M23 terrorist outfit supported by the Rwandan army (RDF) and the regime of criminal Paul Kagame. The fighting continues in other villages, most of which are deserted, and abandoned by the populace.

Until Tuesday, June 28, the Armed Forces of the Democratic Republic of Congo carried out offensives operations and pushed back the terrorists who tried to set up positions in the villages of Ntamugenga, Chengerero, Bikenke, Biguma and Ruseke. After heavy fighting between FARDC and M23 terrorists yesterday Wednesday and this Thursday morning, the FARDC are controlling 99% of the locality of Kabindi in Jomba since yesterday evening. The FARDC pursued the terrorists of M23 until Rugamba.

On Wednesday evening, Lieutenant-Colonel Guillaume Ndjike Kaïko, spokesperson for the Sokola 2 operational sector, specified that the army had taken “the ascendancy” over its adversaries on several fronts and requested the support of the populace.

“Operations are progressing very well. The army has taken the upper hand over the enemy and here we go, little by little. We ask the population to remain calm and to stay behind their army ”.

Other sources claim that dozens of terrorists were killed in these latest clashes. Something the spokesperson declined to comment on at this time.

For more than a month, clashes between the Congolese army and the M23 terrorists have intensified, displacing thousands. DR Congo accuses Rwanda of attacking the DRC. While Rwanda went into its chronic tantrums accusing the FARDC to have FDLR (Democratic Liberation Forces of Rwanda) in their ranks.

At the end of the Superior Council of Defense chaired on Wednesday June 15, 2022 by the Head of State Félix Antoine Tshisekedi Tshilombo, regarding the security situation in the East, some measures were taken against Rwanda.
It was the government spokesman, Patrick Muyaya, who made the announcement on the airwaves of the Congolese National Radio Television (RTNC), at his side was the chief of staff of the army, General Célestin Mbala and the Commissioner General of the Police, General Dieudonné Amuli.

The measures taken are as follows:

The Supreme Defense Council also hailed the “strong” patriotic mobilisation of the Congolese populace for the “unwavering” support for the defense and security forces of the Democratic Republic of Congo.

Patrick Muyaya also instructed the Deputy Prime Minister of the Interior and the Commissioner General of the Congolese National Police to take all the necessary measures to avoid stigmatisation, manhunts and any other act likely to disturb public order, national unity and cohesion during this period.

In the process, the Supreme Defense Council reaffirmed the DRC’s desire to continue the ongoing Nairobi peace process, for the pacification of eastern DRC and the entire sub-regions.

The Supreme Defense Council also asked the Sama Lukonde Government to provide immediate care for the Congolese population in distress, victims of acts of “barbarism and terrorism will not go unpunished”.

The Supreme Defense Council encouraged the Government to make more of the necessary resources available to the Defense and Security Forces to ensure the defense and integrity of the national territory of the Democratic Republic of the Congo.

This is the result of the consequences of the M23 terrorism against the Armed Forces of the Democratic Republic of Congo (FARDC) which led to the conquest of many villages and the border town of Bunagana (Rutshuru territory) in North Kivu) . The National Assembly, which is examining the enabling bill to allow the government to legislate during the parliamentary recess period, announced to the public’s surprise major measures, including the suspension of the ratification of agreements with the Uganda. For good reason, the lower house of the Congolese Parliament considered that “Kampala betrayed Kinshasa by signing agreements with Kigali”.

The National Assembly accused Criminal Yoweri Museveni’s son of having betrayed the DRC and announced the suspension of the process of ratifying the agreements signed with Uganda. For the DRC, Uganda just like Rwanda are not credible partners for the DRC.  According to the President of the National Assembly, Christophe Mboso, the suspension of the ratification of the draft ratification of the agreements signed with Uganda is supported by many national deputies.

“This file has already been sent to us. We blocked it at the office level, we said: it does not pass (…)”, said Christophe Mboso, President of the National Assembly, addressing national elected officials during the plenary session of June 14, 2022.

Bintou Keita, head of the United Nations Organisation Stabilisation Mission in Congo (MONUSCO) said the firepower of M23 terrorists in recent clashes resembled a conventional army more than that of a rebel group.

“ During the most recent clashes, the M23 has behaved more and more like a conventional army than like an armed group. The M23 has increasingly sophisticated firepower and equipment, especially in terms of long-range mortar and machine gun firing capabilities, as well as precision fire on aircraft ,” she said. surprised.

“The threat that this poses both for civilians” and UN peacekeepers “who have a mandate to protect them is evident.”

“Should the M23 continue its well-coordinated attacks against FARDC and MONUSCO with increasing conventional capabilities, the Mission may find itself confronted by a threat that goes beyond its current capabilities,” she noted

Bintou Keita pointed out the strength the terrorist movement constitutes an obvious threat for the population and the peacekeepers who have the mandate to protect it.

She also urged DRC and Rwanda to seize the opportunity to resolve their differences at an upcoming summit hosted by Angola’s President Joao Lourenco in the capital, Luanda.

Keita told the Security Council that “during the most recent hostilities, the M23 has conducted itself increasingly as a conventional army rather than an armed group.”

The Deputy Representative of the United States of America to the United Nations, Richards Mills, expressed his country’s regret at the statements of the Rwandan regime which call into question the impartiality of the United Nations Organisation Mission for the Stabilisation of Congo (MONUSCO) in the context of the conflict between it and the Congolese government.

The American diplomat said so during the United Nations Security Council which met on Wednesday June 29, 2022 in New York, United States.

“ We are extremely disturbed by Rwanda’s statements questioning the impartiality of MONUSCO. The Mission has worked hard to achieve the objectives of its mandate in an impartial manner in an increasingly complex environment. Such statements encourage hostility towards MONUSCO peacekeepers and they are unacceptable ,” he said.

And to continue: ” To be clear, any rhetoric inciting violence or otherwise increasing the risks to MONUSCO personnel and their safety and security is unacceptable “.

The United States has also called for banning any rhetoric that could trigger violence against Kinyarwanda speakers or people of Rwandan descent living in eastern Democratic Republic of the Congo.

Meanwhile, four people died following an ambush by ADF terrorists on Wednesday June 29, 2022 in the village of Kilya, Ruwenzori sector in Beni territory in North Kivu.
The provisional toll is 4 dead, including a woman and two burned motorcycles. The terrorists abandoned a child who was still alive after killing his mother at the scene of the tragedy.

Support for displaced populations around the commercial centre of Komanda, at Beni. During the month of June, more than 160 civilians were killed in various rebel attacks in Beni. The humanitarian crisis, meanwhile, continues to grow.

At least 6 people were killed in clashes between two rebel groups in the Lulenge sector in Fizi territory in South Kivu in eastern Democratic Republic of Congo on Tuesday 28 June.
According to security sources in South Kivu, these clashes occurred between armed group Twiraneho of Makanika and the Mai-Mai Biloze Bishambuke.

The Twiraneho are led by an army colonel, Michel Rukundo Makanika, who deserted in early 2020 and set up a force in the Fizi highlands of South Kivu on the pretext of saving Banyamulenge. However, its turns out that Michel Rukundo Makanika is an agent of Kigali sent to eliminate powerful Banyamulenge. As of today, we have Twiraneho and Gumino both pro Banyamulenge militias are fighting each other, and causing confusion among the community. Thus, the Rwanda regime has created an organisation called Mahoro, to divide Banyamulenge into factions. The Mahoro organisation is more of a security outfit, masquerading as a civil organisation, and was responsible for the death of a prominent Munyamulenge, called Kizehe Raphael Verdum(RIP).

The area is the site of long-running feuds over land and resources between the Banyamulenge on one side and the Bembe, Fuliro and Nyindu groups on the other

According to Lieutenant Meya Jérémie, spokesperson for the twelfth rapid reaction brigade based in the Fizi highlands, 4 Makanika militias and 2 Biloze Bishambuke side were killed.

“The security situation remains troubled and worrying following the clashes. Our concordant sources on the ground confirmed the toll of 4 dead and 10 injured on the Twirwaneho side, but also 5 injured and 2 dead on the Mai-Mai Biloze Bishambuke side. The wounded were taken care of at the general referrer hospital in Minembwe,” Lieutenant Meya Jérémie explained .

Lieutenant Meya Jérémie pointe out that a FARDC soldier was injured by those militias during a reconnaissance patrol towards Bijombo on Tuesday June 28, 2022.

He specified that the rapid reaction sector command has launched in-depth patrols in this area in order to secure the population and their property.

Several armed militias that are active in the territory of Fizi, are hiding behind their communities to commit horrendous crimes against other Congolese. However, other armed militias are sponsored by the Rwanda criminal cabal. Thus, all militias in DR Congo are anti Congolese and hate to see DR Congo develop.