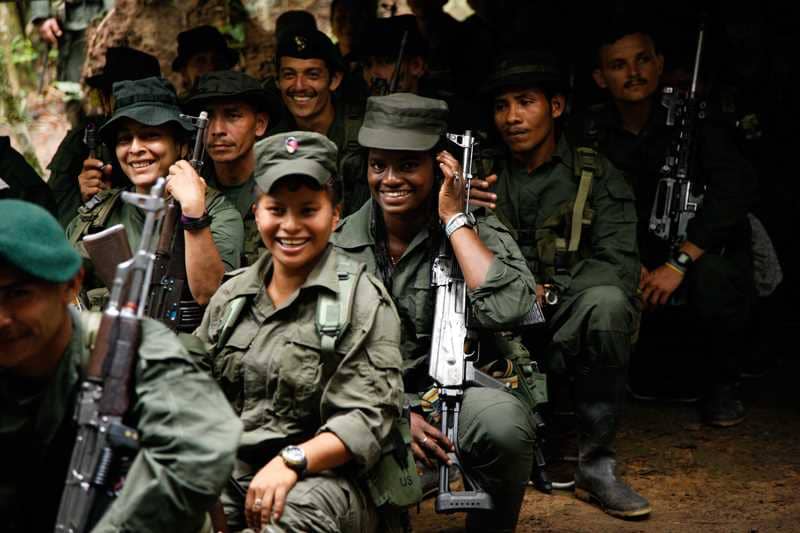 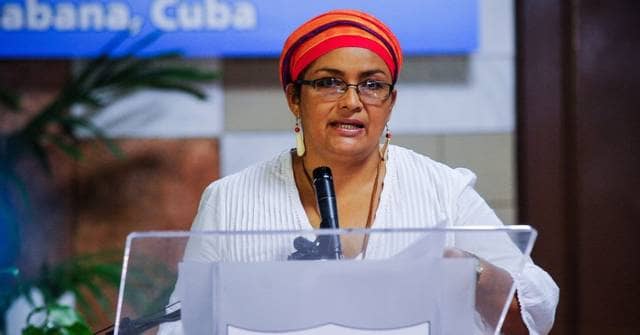 Simanca Judith Herrera, known inside the FARC as ‘Victoria Sandino’, is one of the 12 women interviewed for the book ‘Women: peace, politics and power’, recently published by Ediciones Aurora.

Jesus Anibal Suarez, director of the publisher and editor of the publication, was given the task of making a list of promoters of changes and put them together in the book because he believes that “women will play a decisive role in the consolidation process peace “with the FARC.

TIME reproduces part of the interview made for that publication by economist Chila Pineda to the guerrilla ‘Victoria Sandino’, which entered the FARC 23 years ago and now heads the Subcommittee on Gender table talks in Havana.

One of the issues of greatest concern in the post-conflict scenario is the ratio of para-militarism to mining.

In the daily life of the guerrilla, you receive special treatment because they are women?

There really is no special treatment for being women, by contrast, it is on equal terms with the same tasks, activities, duties and rights, and because those are the conditions of war. When there is confrontation, or attacks by military or paramilitary forces, there is no differential treatment as women; on the contrary, where they know there is a run by women or of women no mercy command more enemy forces, perhaps because they think that the guerrilla are weak and that will be easier to copar that command or destroy it. It is sexist conception they have, and consider that they can not be attacked or beaten by women. So guerrilla must have a hard training, with significant physical demand, besides the permanent study for the construction of revolutionary consciousness and the sacrifices involved in this struggle (…).

We have heard that you have expressed discomfort in particular against the various versions of sexual violence. What is it about?

The issue of sexual violence has been one of the main battlegrounds of those who make opposition to dialogue or those seeking to attend the surrender of the Farc, or see their members in prison; They scavenge for this alleged crimes considered crimes against humanity or war would discredit us before any international body such as the International Criminal Court or the UN. They seek not only to claudiquemos but humble. (…)

It is absurd to think that those who have acquired anti patriarchal revolutionary consciousness let us go to mistreat or to let him mistreat anyone in ranks or outside them.

In various press reports you can read that you are forced to abort. Could you clarify that?

(…) We have chosen to be revolutionary fighters to produce the social, economic, political and cultural the country needs; that involves a series of resignations, as the desire to get pregnant for the safety hazard that implies, not only for the child and the mother but for the whole group, this adds that it is impossible to raise her by the heinous nature of the war imposed by the regime, without our families, sons and daughters become military targets and are persecuted. Are subject to the “violent crime” Disappear or stolen.

So we planned, but if family planning methods fail, or are not achieved in time, and become pregnant, since you have health conditions for the fighter and military security woman, then abortion is practiced, provided the guerrilla agree, even the latest provisions contemplated to be held just before the age of three months of pregnancy and not after that time.

All these stories of forced abortions are supposed testimonies of demobilized; I do not deny the possibility that some major has misinterpreted the rules and has pressured some guerrilla, but this is not the policy of the organization.

In a story of one of you read that sometimes leave the ranks for periods to care for the sick and children. How is that?

When a comrade is pregnant and can not practice abortion or she does not want that to happen, that is, choose to have your baby, it seeks to bring it to a safe place so you can have your baby and spend some time with his son or daughter, for the primary basic care. This depends on the security situation in the area. The problem is that many of our guerrillas have been captured before having their child or later.

There is the case of ‘Andrea’, the guerrillas who were captured and managed to fly away from the hospital leaving recommended his son because he was in an incubator, and the next day he sent to a person authorized to withdraw, it turned out that the army had baby stolen and had given it to the Institute of Family Welfare. The military demanded the presence of the mother so that it can deliver. The child was given up for adoption illegally, without allowing his family to reclaim and less his mother, who is still in the ranks.

Another case is the same ‘Karina’, which is now in government service, whom he bowed his will to fight to bring it to betray its principles by pressing threats to his daughter. You will know that a mother does anything for their children, and has gone through many situations. That is our reality, and still seek to criminalize abortion in the guerrilla ranks, that is an achievement to which we do not give up. And obviously we do respect the freedom of women, not against you. We know what we face and assumed disclaimers, when we are in this life of tireless and tough fight.

You who have heard different women in the Subcommittee on Gender, do you see the fight validity of feminists?

It is not only valid but necessary. We recognize the progress made by feminists, their contribution in the fight for equality and emancipation of women. That struggle has enabled momentous achievements. But we must move forward, because the struggle does not end, we have to study the history, feminist theories, discuss, meet and promote a great movement of women, not only in Colombia but the continent. Let us not forget, however, that the fight is for the change of social paradigm, beyond the feminist struggle, but also can not be ignored feminism.

Our organization is hierarchical and disciplined by its nature, social relations are determined by the respect and camaraderie, but as in every army, power is vertical and is determined by the degree and level of responsibilities. This does not mean that there are patriarchal attitudes colleagues, who are fighting daily with our principles and revolutionary practice. First of all we are a human organization where all arrived with defects, aspirations, deformation; but we have a revolutionary consciousness, collective and democratic spaces that allow us to raise the issues, criticizing those who need correct. With the formation of our men and women in rows and with the population from which we are part.

How is the guerrilla inequality against women?

When I say that in organizing women enjoy equal rights and duties, it is true and is recognized in the statement. But persist macho attitudes and behaviors inherited patriarchal capitalist society from which we come; It expressed in subtle attitudes that appear to be normal, as the case of jokes, comments or condescension and other individual expressions. I must say that the situation of one unit to another in this matter may vary. For where the commander or the commander is aware of the importance of fighting against patriarchal expressions, we guerrilla base much more respectful and in general many women in important jobs, all with great commitment; but where the commander or do not feel the need to correct, it’s up to the girls themselves point out these attitudes. Yes, where mistreatment given to a partner or co row that is severely punished (…).

(…) Almost always, women, after peace is agreed, as happened in Central America, returning to places subordinates of domestic life. Do you yearn for what the future of women combatants ?, what would you like to do in peacetime, in addition to working for social justice?

As peace is not the end of the struggle but its evolution, it is expected that all guerrilla FARC aspire to continue playing a leading role in the new political movement arising from the signing of the agreements. The challenge is even greater peace and women of the Farc assume the same responsibility as we have done in the war. And of course there will be time to share next to our families; the younger ones have all their life ahead.

Do you think that peace can be done without women?

No, there can not be peace without including women, without the active participation of more than half of the Colombian population, because women as men have fought and yearn for a better future for our country and new generations future and because a civilized society can not continue discriminating and oppressing women.

In addition, there is a phenomenon of war, and that is the product of persecution and murder of so many men who occupied the popular leadership, they accounted assume, on numerous occasions, women. That is an objective reason why peace is a matter that falls to women. And for a dignified peace, to the good life, it is essential the recognition of women and our rights.

What impression have left the interventions of the 18 women who have gone to Havana as part of the Subcommittee on Gender?

These meetings have been revealing. Discovering that we identify with many of them, with their struggles and aspirations; we have differences with each other, but we heard and respect. Above all, we can build identities despite the differences. With the two representatives of the LGBTI population has been more than surprising coincidences are differences, they are very willing to contribute to change and to peace people. We share with all men and the desire for peace with social justice, inclusive country that respects differences and give the option of living.

Do you think the Subcommittee on Gender will be continued?

Must have it, that is the agreement between the parties. From our side we put our word on it. Peace is built with everyone, with all the diversity, with women, so the Subcommittee must go up beyond the final agreement.

For many people the FARC-EP is its army