The Congolese political opposition groups met yesterday Monday, July 18, 2016 at the Quai d’Orsay, French headquarters of the Ministry of Foreign Affairs in Paris, the delegation of the Rally for the Defence of values of the Republic. 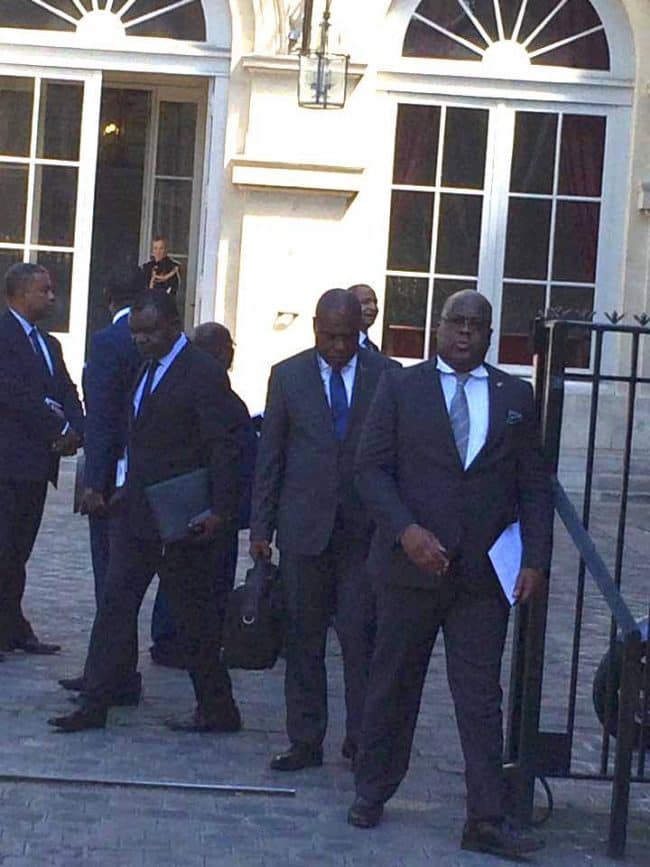 It was recognised in the ranks of the Congolese opposition, Moses Katumbi (G7), Raphael Katebe Katoto (Alternation for the Republic), Gabriel Kyungu wa Kumwanza (G7), Olivier Kamitatu (G7), Delly Sessanga (Alternation for the Republic), FREDDY MATUNGULU (Dynamic), Martin Fayulu (Dynamic), Félix Tshisekedi (UDPS), Gilbert Kankonde (UDPS), etc. The bench of the international community displayed the Director Africa at the French Ministry of Foreign Affairs and his staff, the United Nations Special Envoys, European Union, African Union, the International Organisation of the Francophonie and USA (Thomas Perriello) in the Great Lakes, and the Representatives of Britain (Mrs. Danae), Belgium and Germany.

The meeting lasted about four hours. During this long working session, the two sides exchanged around the well-known issues  including the Dialogue, the electoral process, the 2277 Resolution, the release of political prisoners and opinions, respect for the constitutional period for the organisation of the presidential and national legislative elections, the reconstruction of CENI, the revision of the electoral roll, the development of a timetable consensual electoral, financing and securing the elections, etc.

On this occasion, the leaders of the Rally for the Defence of the Republic of Securities reiterated their position adopted since the Conclave Genval (8 to 10 June 2016), namely the organisation of a dialogue in the spirit and the letter of Resolution 2277 of the UN Security Council (30 March 2016) and not of the order of the Head of State, the release of political prisoners and opinion before the opening of the dialogue work, the refusal any extension of the second and final presidential term, setting of a new neutral and independent office at the head of the CENI, the enrollment of all voters whose major new, audit of the electoral register, the urgent publication of a consensual electoral calendar, etc.

Several participants at the meeting of the Quai d’Orsay, the Special Envoys of the UN, EU, AU, OIF and in USA Great Lakes as well as the representatives of Great Britain, Belgium, Germany and France have shown a understanding of the political issues of the day in Republic of Congo and the legitimate expectations of the Congolese people.
They particularly noted the position Rally Values for the Defense of the Republic of view Dialogue take a truly inclusive and take place under the influence Resolution of 2277.
The great lesson of the choice of the Quai d’Orsay as part Home of the working session yesterday Monday, July 18, 2016 is the formal international recognition of Etienne Tshisekedi and his comrades as key actors in research exit ways and means of the Congolese political crisis.

The second is that the international community is engaged in a approach work towards the Congolese Opposition to maximize the chances of the Dialogue organization, the only way of out of the crisis and relaunch the electoral process failed.
It is in this context that before the last appointment at Pier Orsay, a delegation of the Support Group of the African Union in Facilitating Dialogue had language, there are ten
days in Brussels, with Etienne Tshisekedi and his peers Rally for the Defence of values of the Republic.
To believe the observers, the opposition and representatives of the International community had high bill on trade the extent of the Congolese crisis and therapy to apply it.
But they were keen to emphasize that despite their strong involvement in the Congolese folder sustainable solution to Political crisis comes to the Congolese people themselves and their leaders.