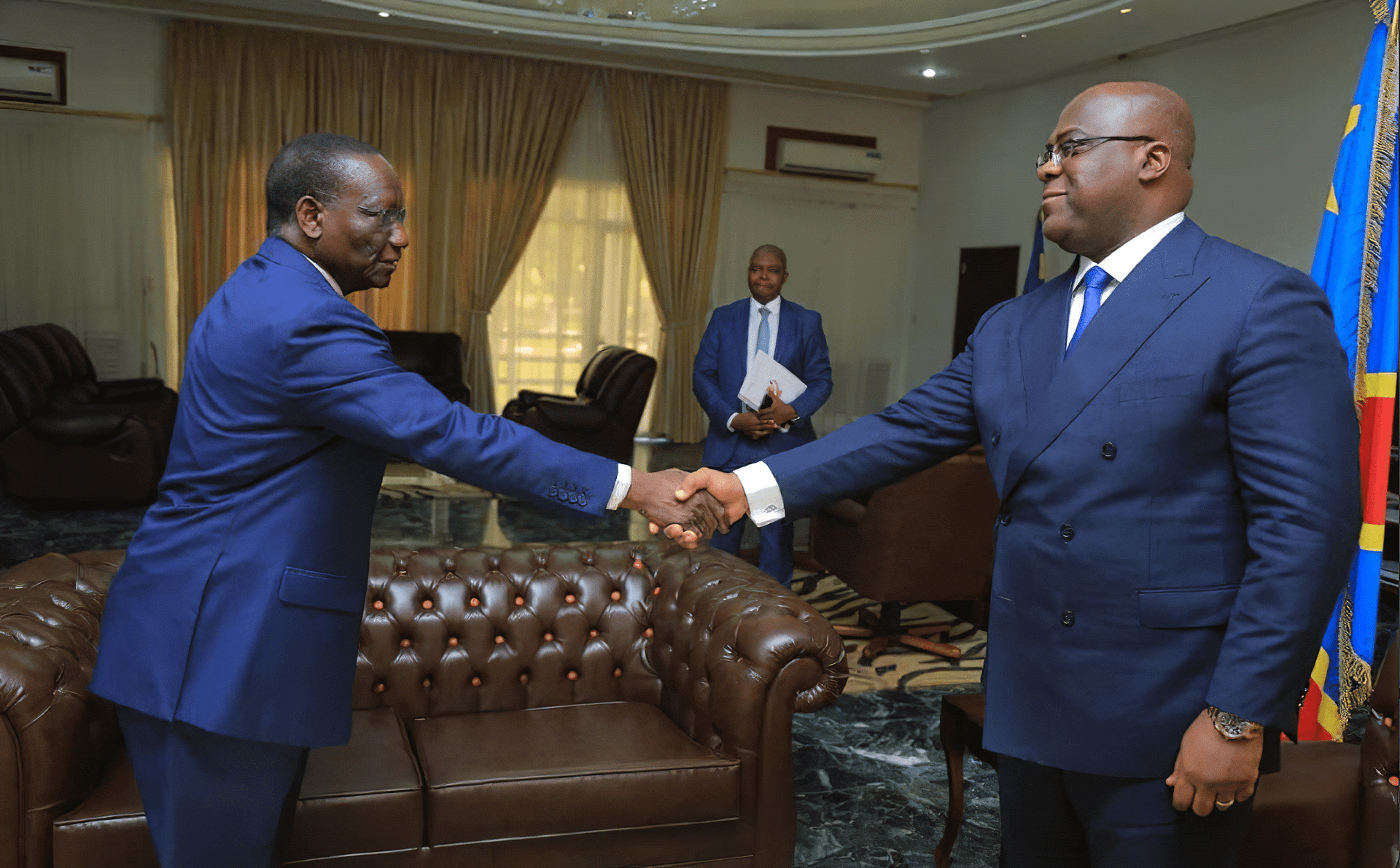 Dr. Syvestre Ilunga Ilukamba has been appointed Prime Minister by Ord. n 19/056. This former Director General of the National Society of Railways of the Congo (SNCC SA) will lead the new Government, whose structure is being developed. The Prime Minister will therefore act as a responsible “politician”, informed of his power, firm in his decisions, moderate in his approach and aware of his limitations. The success of this fragile, and therefore relatively imperfect, balance lies in the moderation and ongoing dialogue that will be maintained over the next five years by not only the political leaders of the FCC / CACH Coalition, their main lieutenants, but also the activists their respective opinions in the population. This gives the new Prime Minister a particularly delicate political responsibility

The difficult issues of the Prime Minister

In recent months, Congolese public opinion has been debating the need to have a re-legitimised Prime Minister exercising his full mandate.

Not without reason, many of our compatriots believe that the governance of the nation can not be accomplished effectively without a competent Prime Minister, acting in good agreement with the President of the Republic and the two Houses of Parliament. In addition, this Prime Minister, with a solid foundation in the two FCC and CACH political families, will assume his competence on a tight-knit, dynamic, well-informed and genuinely committed public team to achieve the objectives agreed upon and to which some other participants will have joined. We now know the name of the one who will take on this heavy task: Mr. Ilunga Ilunkamba.

However, it is regrettable that this debate on the need to have a tenant at the Government House is only rarely pursued on the essential question of the political and technical content that this heavy function should have for our institutions to work with more efficiency.

Who can in today’s conditions, in spite of all that has been done, even if some, in their crusade of weakening of the nation, deny the advances made by the ones and the others in order to better oppose them and thus be able to present itself as the only way out. Who can deny that the DRC needs to increase its internal cohesion and efforts towards progress?

Before going any further, we must remember that in the spirit of our institutions and in the political culture that we want, the Prime Minister is certainly the head of the Government, but is not in any case the competitor. of the President of the Republic. The interest of the nation also requires that the holder, still provisional, of this prestigious post of head of government, do not use this position as a springboard to a future fight for the Supreme Judiciary. The important responsibilities of the Premature require a maximum concentration that leaves little room for the preparation of another conquest. Should we explain the disastrous consequences that would have, on the governance, a political confrontation, was it felted, at the highest level of the State? The Prime Minister should therefore resist this temptation, which will be strong.

The Prime Minister should not therefore be the rival of the Head of State or even subscribe to the hypothesis of future claimant to the Presidency of the Republic, but his role can not be limited to that of a mere executor or a delicate transmission belt between the Head of State and the Ministers responsible for their respective sectors.

The spirit of our laws is that the Prime Minister, emanating from the elected parliamentary majority, act as a director, therefore a true organiser of the policy defined by the President of the Republic, elected by universal suffrage, and partnership with its political allies.

To simplify, we will say, the President of the Republic watches over the principles and sets the objectives, while his Prime Minister organises the most efficient and cost-effective reaching of previously agreed goals. If one is the architect of the work, the other should be the attentive and faithful conductor of the works of the vision building. The Prime Minister will therefore act as a responsible “politician”, informed of his power, firm in his decisions, moderate in his approach and aware of his limitations.

The success of this fragile, and therefore relatively imperfect, balance lies in the moderation and ongoing dialogue that will be maintained over the next five years by not only the political leaders of the FCC / CACH Coalition, their main lieutenants, but also the activists their respective opinions in the population. This gives the new Prime Minister a particularly delicate political responsibility.

The political configuration of today.

It is in relation to this imperative of “permanent mediator” of the parliamentary majority that the incoming Prime Minister will assume a specific role in the opening legislature. Indeed, since the signing of the FCC / CACH political agreement, confirmed by the vote, at the head of the National Assembly, the parliamentary representation of this coalition, there exists in the DRC a political grouping that must be considered in as such and manage accordingly. The appearance of this coalition really re configures the Congolese political chessboard.

Let us first recall that this group wants to be united by the attachment of the main parties that compose it, both the values ​​of social democracy and the imperative of respect for national unity and sovereignty. Let us emphasise here that these principles of national unity and sovereignty advocated by the national hero Patrice Lumumba in the struggle for independence were promoted by both Laurent Désiré Kabila and Etienne Tshisekedi as the basis of their respective political project.

Today, once again, as in 1960, the political news imposes on us a configuration that divides the political elites of our country into two antagonistic branches. As in the years of the colonialist dispute, the dividing line separates those who believe that the DRC should privilege its sovereignty and pay the price and the group that naively think that to develop the country, the governance of the DRC should submit to the conditions of the major Western capitals. Once again, mine management is at the centre of the debate; the revised Mining Code symbolises the situation perfectly.

So far, at the national level, outgoing President Joseph Kabila has embodied alone this option of independence and dignity; but how to exclude the current President Felix Tshisekedi Tshilombo, having in mind that his mentor Etienne Tshisekedi and his party UDPS built the three decades of their fight on the same principle. What content would the rally cry “the people first” mean if the wealth of the DRC continued to go to other skies for the benefit of others?

Now that the first appointed is in the Senate and the second will be held by the reserve imposed by his status as President of the Republic, it will be necessary for the Prime Minister, whom we have described above as “Permanent Ombudsman”, to assume and ensures, by delegation of two coalition leaders, in addition to the heavy task of head of government, that of coordinator of the majority. Political caution would also require that the two so-called moral authorities of the FCC / CACH Coalition remain relatively distant from the daily political management of the alliance; this role should and should be the responsibility of the Prime Minister.

The challenge is to defend the interests of the Congolese

The task of the Prime Minister will be tough, the Congolese are waiting a lot and we can think that they will not be patient. It will be necessary to ensure peace; fight corruption and impunity; revive the reconstruction of infrastructures started in 2008 with the five construction sites; boosting agriculture, the priority that still does not take off; to improve teaching, the only way to prepare well for the future; Advancing our public health system and many other sectors of life and the national economy.

In addition to these technical challenges, more or less technical, political and diplomatic theatre will not be relaxing. As President J. Kabila told us, hostility will still come from abroad; the main instrument of this animosity will be the “Lamuka”. It will be necessary, next to the President of the Republic, that the Head of Government ensures.

To face the Lamuka, born in Geneva at the initiative and under the impulse of Western mining lobbies, it is imperative that the current nationalist parliamentary majority is organised, structured and strengthened so as to be well prepared the battles that are coming. In this consolidation task of the FCC / CACH coalition, the Prime Minister will have a key political role.

It would be naive to think that Lamuka leaders are coming back to the DRC to fight a president who is no longer in office. They descend into the arena to resume the battle that Martin Fayulu failed to win. That is not mistaken, the goal of the ghosts is to win back the DR. Congo on behalf of Western mining companies.

Is this the fate we want to reserve for the struggle of our fathers? The FCC / CACH coalition therefore knows who to defend against. The prime minister, head of government and coordinator of the majority, has a lot of work to do.

Cadre of the FCC / CACH coalition