The President of DR Congo Felix Tshisekedi Tshilombo, as guarantor of the good functioning of the Republic, began to initiate the governors and vice-governors newly elected to his vision traced on the integral development of DR Congo, that is to say, a successful development in all sectors. On Monday, May 13, at Kempisky River Congo Hotel where he solemnly opened the Governors’ Seminar scheduled to run for three days. 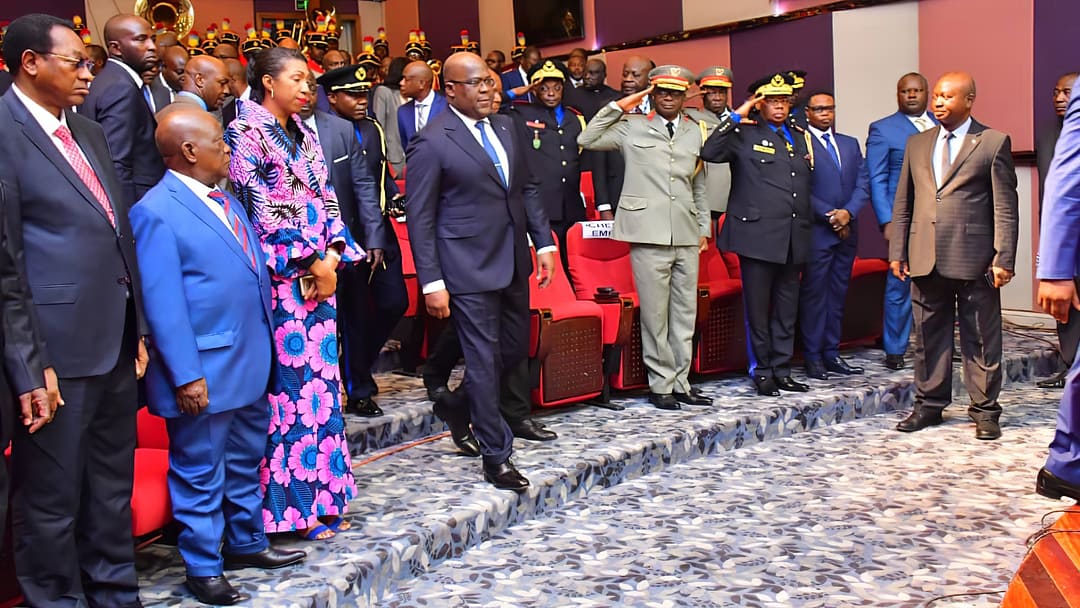 SPEECH BY HIS EXCELLENCY THE PRESIDENT OF THE REPUBLIC, HEAD OF THE STATE, ON THE OCCASION OF THE SEMINAR OF GOVERNORS

Honorable President of the Provisional Office of the Senate,

Ladies and Gentlemen, Members of the Government,

The seminar which opens today in Kinshasa for the Governors and Vice-Governors of the Provinces newly elected by the different Provincial Assemblies gives me the opportunity to unveil the main articulations of my vision notably based on the four strategic axes which aim to improve the living conditions of our population for whom I made the solemn commitment during my investiture speech to serve in strict compliance with the Constitution of the Republic.

First of all, I would like to remind you that you are the worthy representatives of the President of the Republic in your respective provinces. This requires you to adopt exemplary behaviour in the management of your respective entities. This also means that you have the obligation to develop your respective programs that will be adopted by the Provincial Assemblies, integrating my vision which aims at the integral development of our country.

In other words, man will be at the centre of all your actions in the different areas of life.

I therefore count on each one of you so that at the end of my mandate, we can bring together the change I promised to the Congolese people during my electoral campaign.

As far as I am concerned, I will spare no effort to achieve this noble goal, by inculcating in all the institutions of the Republic the republican values ​​which will be of strict observance. I promise you. Because, the antivirals which undermine our institutions constitute the first obstacle to any effort of development.

I will fight, with the last energy, corruption, the embezzlement of public funds, tribalism, nepotism, bribery, clientelism, incivism and so on.

Respect for human rights and fundamental freedoms will be ensured.

My vision is divided around the four strategic axes which are:

These four strategic axes constitute the base on which I will base my priorities grouped in 20 pillars, namely:

The pacification of the country, that is to say, peace and security;
National reconciliation
Consolidation of democracy;
The restoration of the rule of law and its authority, namely the National Army, National Police, Intelligence Services, Justice, Human Rights, Public Administration, Territorial Administration and decentralisation;
Rehabilitation of the image of diplomacy;
The fight against corruption and economic crime;
Consolidating macroeconomic stability and fiscal consolidation and reforming the financial system;
Education as the key to change and the main social lift;
The establishment of universal health coverage;
Employment promotion and continuing vocational training;
Empowering women and promoting youth;
Improving the business climate and promoting entrepreneurship;
The fight against climate change;
Access to electricity and water;
Land use planning, development and modernisation of businesses;
The development of agriculture and agribusiness;
Diversification of the national economy and the development of trade, industry and SMEs / SMIs;
Revitalising the mining and hydrocarbons sector by making them attractive and efficient;
Tourism, culture and arts development;
The fight against poverty, exclusion and vulnerability.

I had time to cross some provinces of the Republic; and on that occasion, I was shocked by the administrative, police and military harassment facing the general population and economic operators in particular, tax evasion and the barriers organised and maintained by certain provincial, military and military authorities. Police, the multiplicity of services and other bodies at the border posts instead of 4 recognised by the law, the poor condition of roads and housing, the precarious health infrastructure, school and other … You can here understand that the task ahead is heavy and the challenges are enormous. I will ensure, within the framework of the retro-cession that the consequent means are allocated to you to overcome the challenge of the development.

During this seminar, where various speakers will develop in depth the axes and pillars that I have just revealed to you as an indication, I would like, in turn, that a contract-program be concluded between you and the national executive, which would allow me to evaluate the performance of each of you, in order to give me the opportunity to properly sanction your governance after each quarterly assessment.

This means that you have understood that the time of so much decried impunity is over. It is for this reason that I have already had to suspend a Minister and some public agents guilty of acts of megestion.

You are unaware that you have been elected to serve the people first and the rest immediately after.

While wishing you every success in your work, I declare open the first seminar of Governors and Vice-Governors of the provinces.