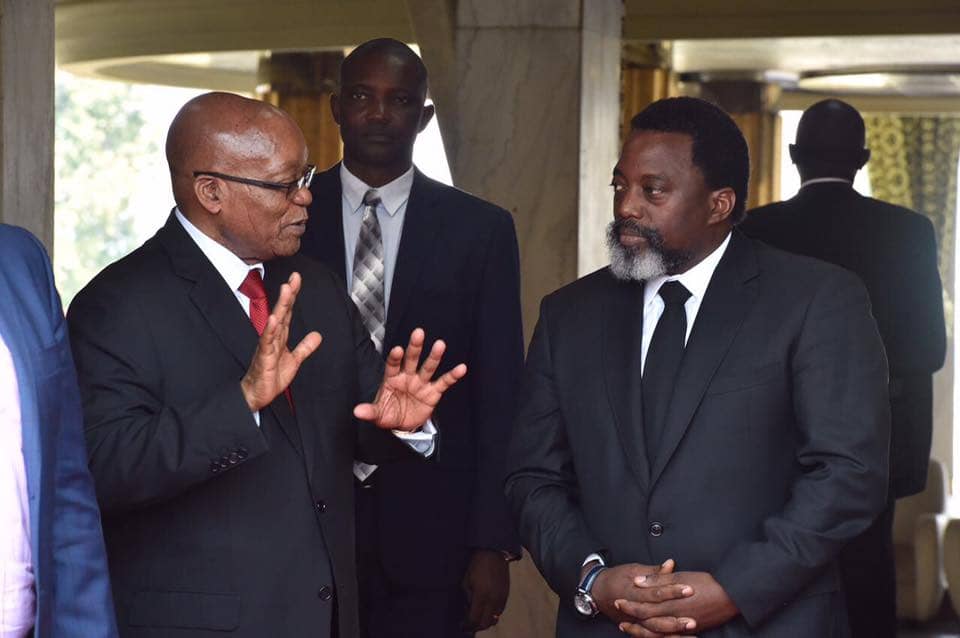 The Head of State of South Africa, among other things, expressed his support for the ongoing electoral process in the Democratic Republic of Congo.
On Sunday 15 October 2017, Congolese President Joseph Kabila Kabange met with his South African counterpart, Jacob Gedleyihlekisa Zuma, who arrived in Kinshasa the previous day. The meeting took place in the morning in the offices of the Palais de la Nation. 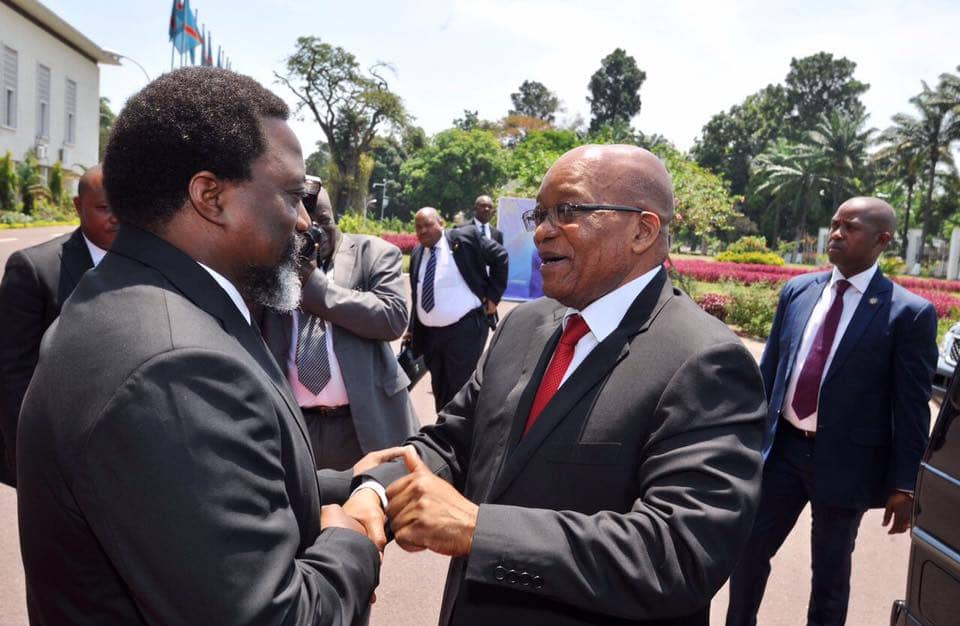 From the joint communique issued at the end of the working session, it emerged that the two statesmen “exchanged views on the development of the political, security and economic situation in the SADC Area as well as in the Great Lakes region”.

In this context, they reiterated “their full support for the relevant decisions of the 37th SADC summit on the positive position of the political situation in the Democratic Republic of Congo”.

It should be recalled that at the time of these meetings held in Pretoria on 19 and 20 August 2017, the sub-regional institution first took note of a number of problems which made it unrealistic to hold elections by the Democratic Republic of the Congo in December 2017 as originally foreseen “and requested CENI” to publish the revised electoral calendar in consultation with the Government and the National Council for the Implementation of the 31 December 2016 Agreement ” CNSA) “, secondly” called upon the international community and all stakeholders to continue to support the implementation of the Agreement concluded on 31 December 2016 and to respect the wishes of the Congolese people to ensure peace, security and lasting stability in the DRC “, and thirdly” urged all stakeholders to refrain from any action likely to undermine political stability security situation “in relation to the situation prevailing in the Kasai area, the fourth” approved the appointment of a Special Envoy to the DRC in the light of the political and security dynamics prevailing in the country, and “entrusted HE President Jacob Zuma, President of SADC, and His Majesty King Mswati III, outgoing President of SADC, to finalise the consultations and appointment of the Special Envoy”, fifthly “Commended President Joseph Kabange Kabila, the Government of the DRC and other stakeholders for the progress made in implementing the provisions of the Peace Agreement concluded on 31 December 2016” and sixth “denounced and condemned extra-continental interference in the affairs of the AU member states, in particular, the practice of sanctions committed by non-African organisations and in violation of the principles of State sovereignty and non-interference “, before calling” these organisations to withdraw these sanctions and to avoid taking such measures in the future by giving priority to dialogue and mutual respect ” “.

It is stated in the joint communique of Sunday, 15 October 2017, that Presidents Kabila and Zuma “reaffirmed their determination to consolidate the achievements of democracy, stability, security and prosperity for the peoples of the region “, as well as” renewed their commitment to consolidate the existing bilateral relations “between the DRC and South Africa.

The final communique reported that the Congolese Heads of State were assisted by the Minister of State Alexis Thambwe Mwamba, in charge of Justice and Attorney General, assuming the interim VPM and Minister of Foreign Affairs and Regional Integration Léonard She Okitundu on a mission abroad, while her South African counterpart was assisted by Maite Nkoana Mashabane, Minister of International Relations and Cooperation.