A political declaration of the Congolese opposition made public by the Secretary General of the UFC, the Minister of State, Minister of Budget, Michel Bongongo was popular with 82% of Congolese who saw in it a commendable effort to lasting peace in the DRC. It is followed by that of the dynamics of the Opposition and the New Class and Social Policy, 63%. 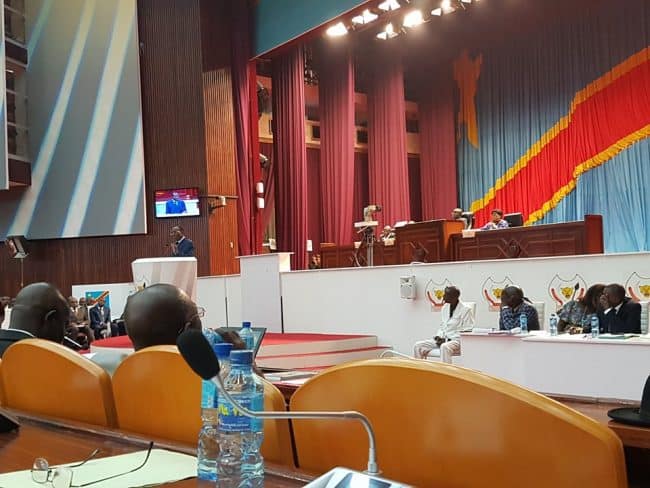 Without peace, no development or social welfare can not consider. After two decades of internal strife, civil war and aggression, the Democratic Republic of Congo is getting back to normal thanks to the stability of institutions, strengthening its defense capabilities and the maintenance of public order . In short, the progressive return, but real peace is greeted with joy by the entire Congolese people who lost over six million of his daughters and son during the troubled period.

Today, the unrest that has gripped the entire Congolese political class view of the upcoming general election, opinion is concerned and worried to see the country get back into the situation it still struggling to escape. Echos Opinion, which set a goal to make the evaluation of all aspects of life in DRC using the popular barometer, went to ask the Congolese themselves how they appreciate how each political grouping or society contributes to the effective return and the final entrenchment of peace in their country.

Reason: peace is a very rare commodity and a key element of development and well-being, it is essential that it permanently implanted in the DRC and that each, in its way will contribute to its consolidation.

This opinion poll referred twofold, namely: know if Congolese are really interested in effective and definitive return of peace and the way they judge the efforts of each political grouping and civil society to achieve this goal.

This work was carried out taking into account the qualitative and quantitative aspects:

Quality: comply with established standards is a requirement in conducting scientific work. As part of this work we have tried to strictly observe the variables of gender, level of education and stratification of different age groups in order to obtain results that reflect an objective view of the entire Congolese people.

The parameters considered biased and negative to the example of those that relate to tribe, ethics, provincial, linguistic, religious or political were not as criteria in making this work.

The sample used in this survey, is a thousand people, all major and Congolese nationality. It was considered sufficiently representative to reflect the views of Congolese about the efforts of groups or political platforms and civil society to consolidate peace in the DRC.

Through them, it is also judged the quality of their leaders.

The combinations or political platforms and the Best Rated civil society

The table below lists the names of ten platforms or political groupings and civil society deemed those working best for the final return and the consolidation of peace in the DRC. They were, thus selected, following the reply given by each of the surveys to the question: “What political grouping or civil society works, according to your estimation, for the definitive return of peace and its consolidation in the DRC? “Here, the record of freedom choice. Despite the possibility of making the choice of one or more combinations given to respondents, the sample remained the same, the one thousand person. It has not undergone any change.

While retaining all the choices of the interviewee, Echos Opinion had not carried on the duplication or multiplication by so many times from the same individual for the number of his choice.

What consolidation or civil society works, according to your estimation, for the definitive return of peace and its consolidation in the DRC.

The political platform led by Senate President warned the extremist views that threaten peace by returning back to back the recent statements of the majority and the opposition after the conclave of Brussels. She is in favor of dialogue with respect for the Constitution, but also to secure the function of Head of State.

Have demanded that the dialogue in order to meet the spirit of the letter of the 2277 Resolution N.U Security Council and that it results in a political agreement between the majority and opposition.

For the six challenges: rebuilding the state that goes through the restoration of peace; morality and conscience of the Congolese man; fight against poverty ; attention to sustainable growth, inclusive and sustainable; Education and Health

Advocates dialogue, rejects the violation of the constitution by the coup scheme of State, it undertakes to respect the constitutional order by the next election organization.

Considering the results obtained in , the Republican controlled master hands Opposition by Senate President Leon Kengo wa Dondo, leads with 82.3% of favorable opinion. Congolese having made this choice believe that the position adopted by the Republican opposition in the wake of his statement read by Professor Michel Bongongo and by which it had voted “in favor of an inclusive dialogue in accordance with the constitution for the priority given to the presidential and legislative, but also for the security of the State Head of Service “campaigns for the final return and consolidation of peace in the DRC.

In second place comes the dynamics of the Opposition and the New Political and social class, which got 63.2% of favorable opinion. Its requirement for facilitation reflect guarantee peace and obey the spirit and letter of the 2277 resolution of the United Nations Security Council and its desire to see the next dialogue to reach a political agreement majority and Opposition are all signals that reflect its determination to see a definitive and consolidated peace settle in DRC.

New Initiative Congo (NIC) is realigned in third place. At 60.5%, the Congolese have endorsed the platform program chaired by Professor Florentin Makonda Mbonza in facing the challenges it identifies six to create better living conditions in the DRC. These are: the rebuilding of the Congolese State; the conscience and morality of Congolese human; the fight against poverty; Education; and health.

The third place is occupied by the opposition Patriotic and Republican (PRO) which obtained 60.5% tied with the NIC. Congolese in this political platform, endorse the invitation by it to members of the opposition are still reluctant to join the path of dialogue because it believes that the opposition in its diversity is a strength to capitalize save in establishing a realistic electoral calendar.

The Presidential Majority is approved 57.7% and ranked fifth. The Congolese who favor the MP are wise to refuse to circumvent the constitutional elections by a coup scheme.

The pro-Opposition Dialogue is placed in sixth position with 53% of votes cast. This approval is justified by its desire to see all Congolese to meet in dialogue in order to prevent a catastrophe in the country and the Congolese people.

The Citizen Front for its part is positioned in seventh place with 54.8% for its refusal to form a front against dialogue but it stated its concern that hold the constitutionally required elections.

The Association of Civil Society leaders was eighth with 5.6% of positive opinion for advocating the unity of civil society to play its real role, that of a true church in the village . She does not want civil society to become hostage to politicians. Rather, it is the one to push politicians to go Dialogue.

Follows in ninth place, the political platform called “The Rally of Forces acquired Change” approved by 51.8% of votes cast. This fringe of the Congolese opinion approves its willingness to dialogue convened by the spirit and letter of the 2277 resolution of the UN Security Council and the framework agreement of Addis Ababa.

The Group of seven political parties (G7) brings up the rear of the top ten political and civil society groups considered those who work their best for the effective and definitive return of peace in the DRC. He is ranked tenth with 50.5% of opinion marrying his thesis of the holding of the presidential and legislative elections before the constitutional deadline.

Reading the results obtained during the investigation show that the Congolese overwhelmingly, want to hold a dialogue through which a confrontation can be avoided. The plebiscite platforms that were imposed for dialogue and a peaceful transition by respecting the Constitution and the organization of elections to the eased outcome can be explained by the fear felt by the Congolese to see their dive back into a cycle of violence with unknown consequences.

We can remember that the Congolese are aware of the issues and to truly cares about a definitive return of peace in their country and its consolidation. They really appreciate the efforts made by each political grouping and civil society tending to entrench the culture of peace in the DRC.

In view of the above, Echoes of opinion can be estimated pleased with his approach by which it referred a twin goals: whether the Congolese are concerned about the definitive return of peace in their country and how they appreciate efforts of each platform or political grouping and civil society for this purpose. The results demonstrated sufficiently that the Congolese do not want to come to a confrontation between the people of a camp it is.

Thus, politicians or leaders of various groups can learn from and work so as to give satisfaction to a people who have suffered too much from the atrocities of the internal confrontation or wars of aggression.

The results of a poll not being fixed data, they can also change according to the opinion.

Echos of opinion welcomes all actors of peace in the DRC, depending on how their efforts have been recognised by the Congolese through political groupings and civil society of which they are prime movers.