From 27 to 28 June, a delegation of MONUSCO, led by the Deputy Special Representative for Operations in Eastern, David Gressly and the Force Commander of MONUSCO, General Derrick Ngwebi, visited the northern part of the province of North Kivu usually called “North”. 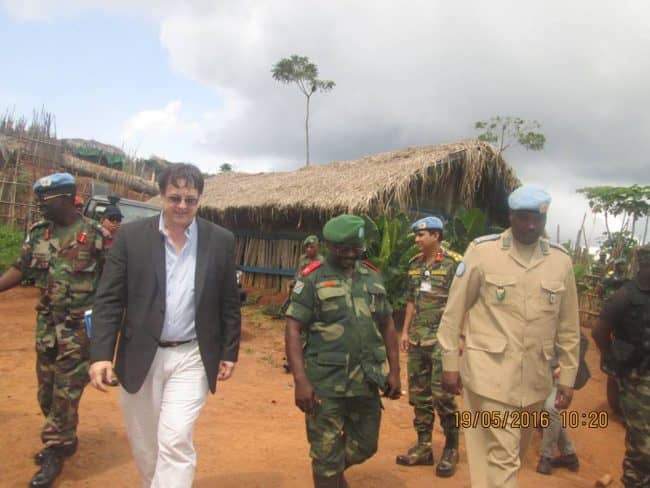 For two days, the delegation visited the localities of Beni, Butembo and Lubero and met with Congolese political and military authorities, leaders of civil society and United Nations staff working in this area. The main topics discussed at these meetings were related to the security situation in the region and the protection of civilian populations.

For better protection of civilians, MONUSCO intends to strengthen its early warning system that helps prevent certain situations in time when civilians are threatened or targeted by armed groups. The system goes to the collection of information actions to take, through the processing and verification of the information and the resources required.

Activities of the components of MONUSCO

As part of the pacification of Walendu Bindi area beset by abuses of the armed group FRPI, the Gender Unit of MONUSCO in Ituri has accompanied the June 22 to 24 a delegation of women leaders of Ituri, in their visit women Walendu Bindi.

The goal was to create an exchange with these women and encourage them to get involved in the stabilization process of this negative influence in area of armed groups.

This initiative builds on Resolution 1325 of the United Nations on the role of women in peace and security.

Congolese women have integrated into FARDC and provide support to ensure security in the DRC.

During the exchanges, these women have pointed to the lack of political will of the Congolese authorities side to find a lasting solution to the FRPI phenomenon. Moreover, they are committed to rependre within their community outreach actions to encourage militia demobilization.

On the sidelines of the celebration of the Day of the African Child Protection Section of the child MONUSCO has initiated outreach activities Gety, in the leadership of Walendu Bindi, from June 23 to 25

On June 23, a film showing the negative effects of the use of children in conflict was projected to more than 100 people, including elements of the FARDC. This projection was followed by a broken stick debate on the subject.

The next day, a round table was held with the leaders of Walendu Bindi. Finally, following the example of the Leopards, children’s clubs and soccer Gety Tchekele clashed in a friendly to say no to the recruitment and use of children in conflicts.

In Kalemie, the Public Information Section of MONUSCO held today, a training session for the benefit of 30 media professionals from Kongolo region, locality situated 360 km north-west of Kalemie (Tanganyika province). The training is based on a reminder of the principles of journalism (Ethics and Conduct) and awareness of the 2277 Resolution.

During this training, the Child Protection section and the gender adviser MONUSCO, Jamila Seftaoui, will address several topics as the law on the protection of the child, not the recruitment of children, children of the liberation of armed groups, the fight against sexual violence MONUSCO made available to those media professionals documentation on journalism, copies of the 2277 Resolution 2272 Resolution on the abuse and sexual exploitation (SEA) and different numbers Magazine Echos MONUSCO.

Section Public Information MONUSCO-Kalemie plans to extend this training to the benefit of media practitioners in the 6 territories of the province of Tanganyika.