The nation will spend two days of tributes to the King of rumba. Died April 24, 2016 in Abidjan, lifting the body of the artist Papa Wemba intervenes, this Monday, May 2, 2016, to the morgue of the hospital Cinquantenaire. His Resting until next Wednesday at the Lobby Hall of the People, the seat of parliament in Kinshasa. The Head of State is advertised to pay their last tribute and decorate the posthumously with a Medal of the highest distinction.

After the ceremonial, the coffin will leave the Chamber for the Molokai Village in the district Matonge, considered artistic bastion of the star of the rumba, for four hours of time, before returning to the place of official exhibition for the future from the program. These details come from the Minister of Culture and Arts, which was confirmed during a press conference last weekend in his study. 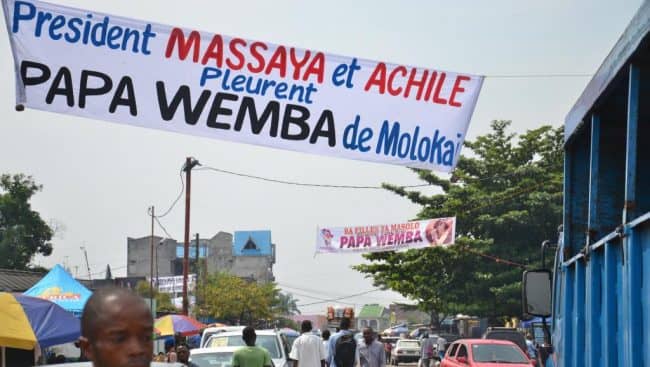 Banza Mukalay has also attached the opinion on the reason for the relocation of the place of the body of the exhibition as planned initially at the Stade des Martyrs. For him, it comes simply to preserve the security of personalities who come from all over the world to pay homage to this great icon of Congolese music, African and even global.

The head of the Culture and Arts invites the Congolese to honor worthily deserved tributes to making Papa Wemba. He especially insisted that grief is artistic and cultural, not political. Banza Mukalay warns political recovery and opposes the presence of the flags of political parties on the place of the artist’s funeral. Especially in his lifetime, the illustrious disappeared belonged to no movement or political association. He, moreover, reported that a condolence book is already open in three locations, namely: the Ministry of Culture and Arts in Gombe, Village Molokai Matonge and Commercial at Ma Campagne.

Finally, the Minister supervising released the last official program of national funeral of the artist in its entirety. It is as follows:

7:00: Implementation completed in the Main Hall of the Palace of the People

7:45: Arrival of Military and Civil Authorities

8:30 – arrival of the Presidents of Institutions to Support Democracy

Arrival of Members of the Senate Offices of the National Assembly

8:45 – arrival of the Attorney General of the Republic

9:05 – arrival of the President of the Senate

9:10 – arrival of the Honourable Speaker of the National Assembly

10:00 am: Arrival of His Excellency Mr. Joseph Kabila, President of the Republic

Early laying of wreaths of flowers with the President of the Republic in the following order:

7. Dean of the Diplomatic corps

8. Chief of General Staff of the Armed Forces of the Democratic Republic of Congo

9. Commissioner General of the National Police

10. Governor of the city province of Kinshasa, President of the Committee of the funeral Organizer

14. Representative of the biological family of the deceased

Meditation by the President of the Republic before the remains

10:45: Departure of His Excellency the President of the Republic

11:00: free Wreath laying of flowers and continuation of the program.

Recollection of the population
Testimonials

10.00 am: Funeral Oration by the Governor of Kinshasa, President of the Organizing Committee

12:00: Body lifting for NECROPOLIS Cemetery BETWEEN LAND AND SKY